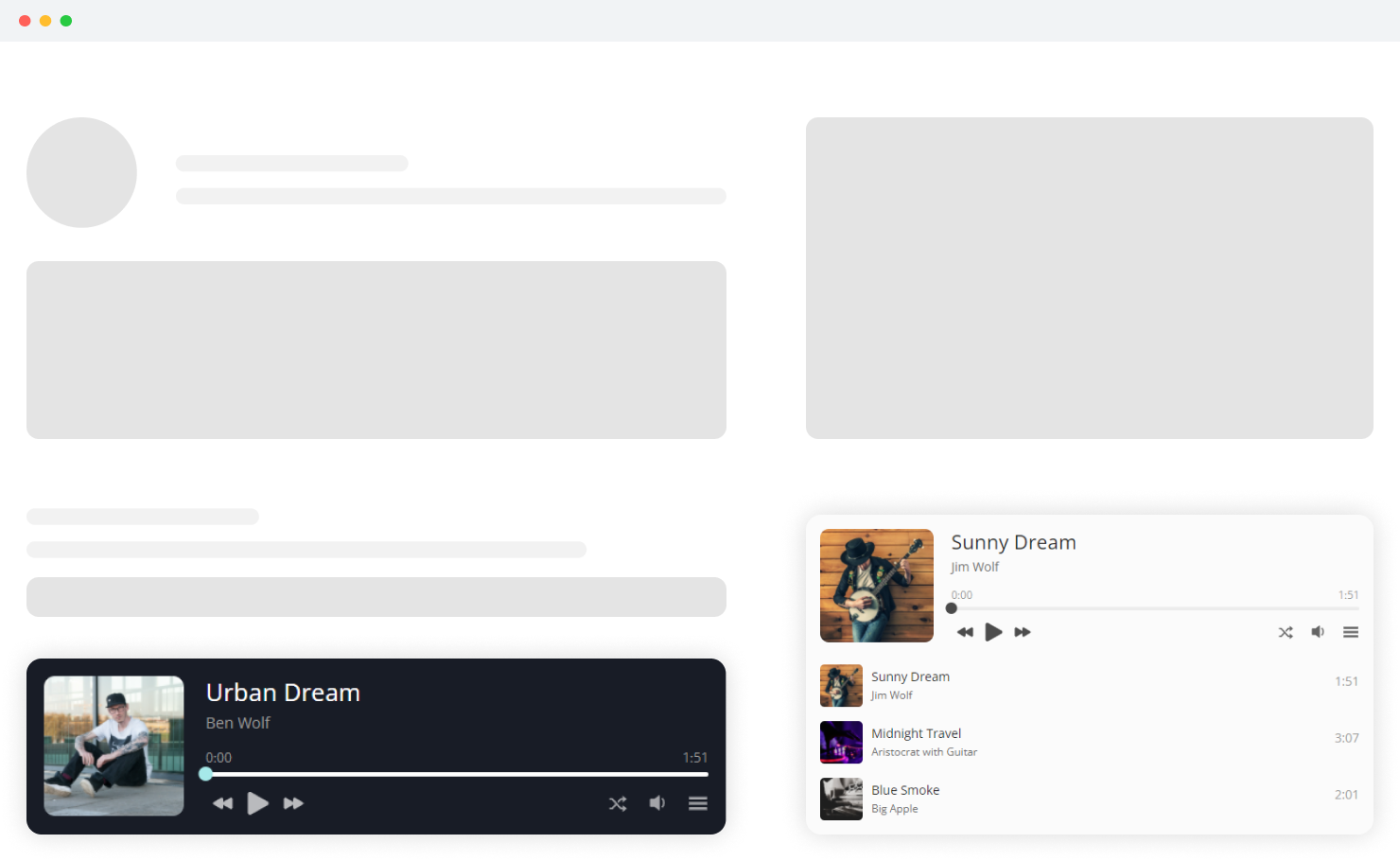 Why use Audio Player on your store?

Get Yourself Noticed with the Audio Player app for Cratejoy

Make your mp3 files, music, songs, podcasts, and other equally entertaining audio projects accessible on your Cratejoy store to a broader audience using this powerful music player app for Cratejoy!

Adding Value to Your Cratejoy store Content with a Playlist Widget

Give your Cratejoy store content more variety and cater to the needs of your audience. Add a read-along for children to follow stories, create podcasts, or add accompanying music playlists to your text.

Optimize the user experience with a Music Player Widget

You can improve your Cratejoy store users' experience by providing specific audio files with an mp3 player widget. For example, you can create audio versions of your well-researched, highly informative, and exceptionally entertaining text and upload them via the app so vision-impaired users can enjoy them. Alternatively, you could make it available to those who are on the go and cannot sit down and read your long text.

Cratejoy Audio Player app allows you to add audio from various sources to your Cratejoy store — Be it MP3s or links to audio and video hosting websites like YouTube, Vimeo, SoundCloud and more! 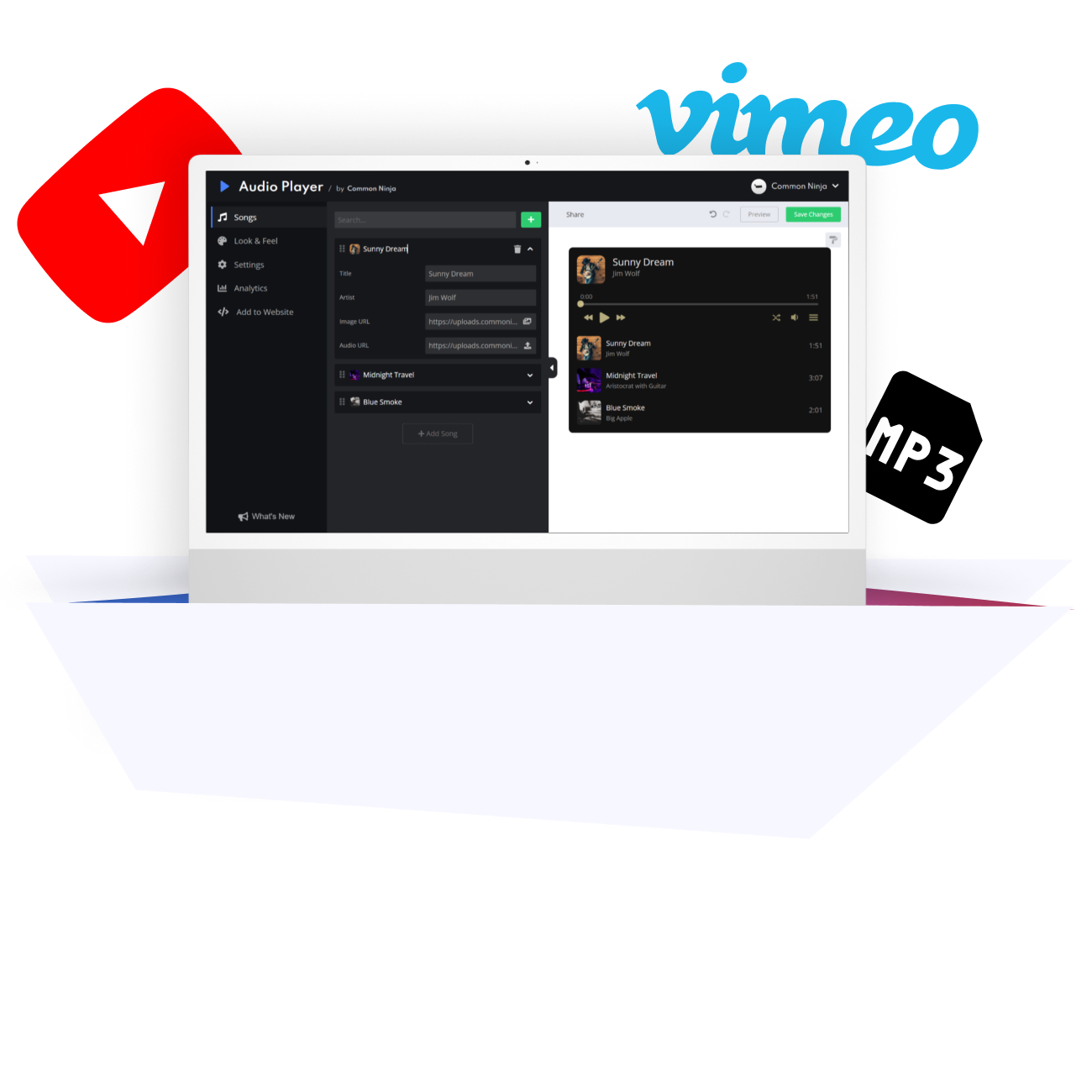 Users can listen to your audio in random order using the Music Player app's shuffle option. 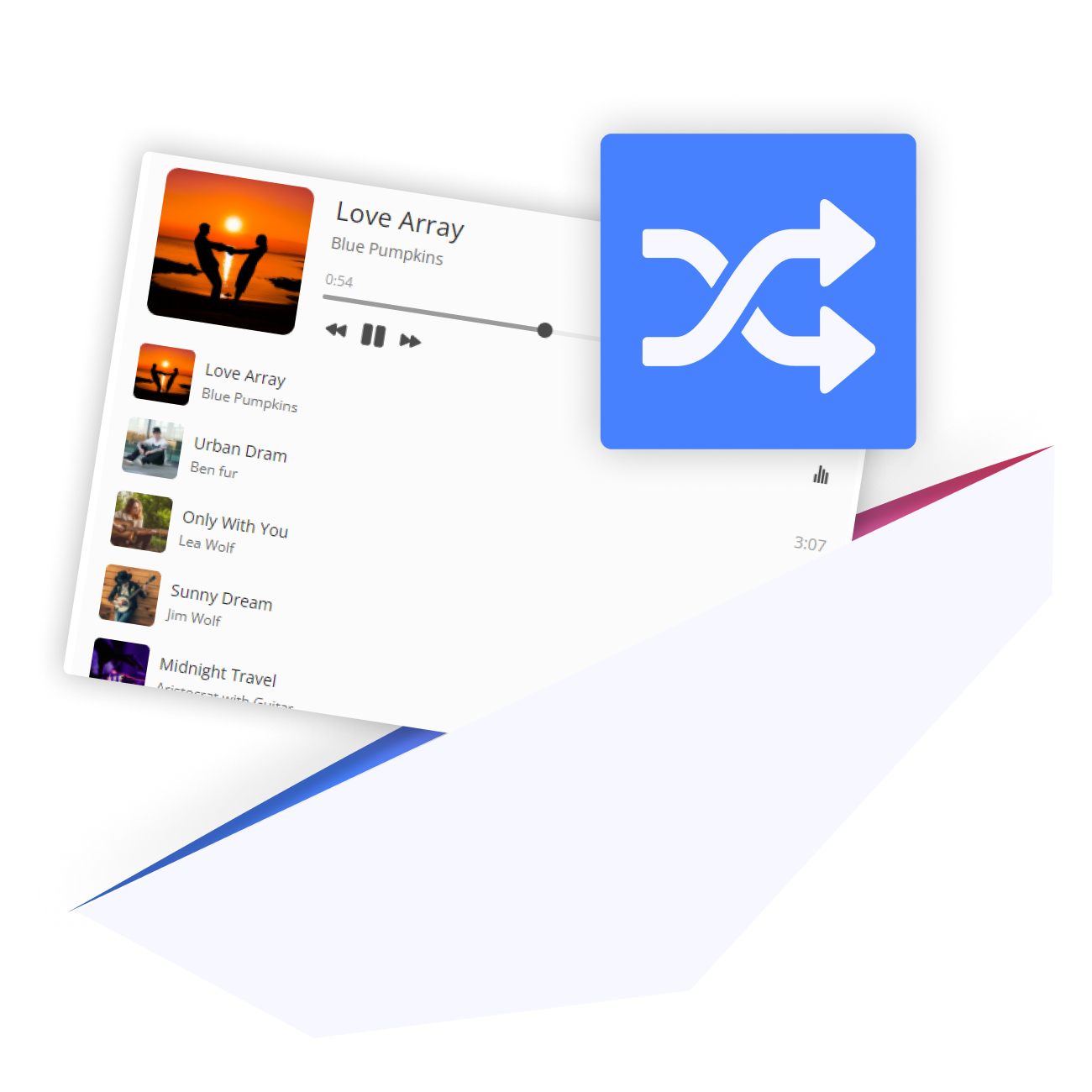 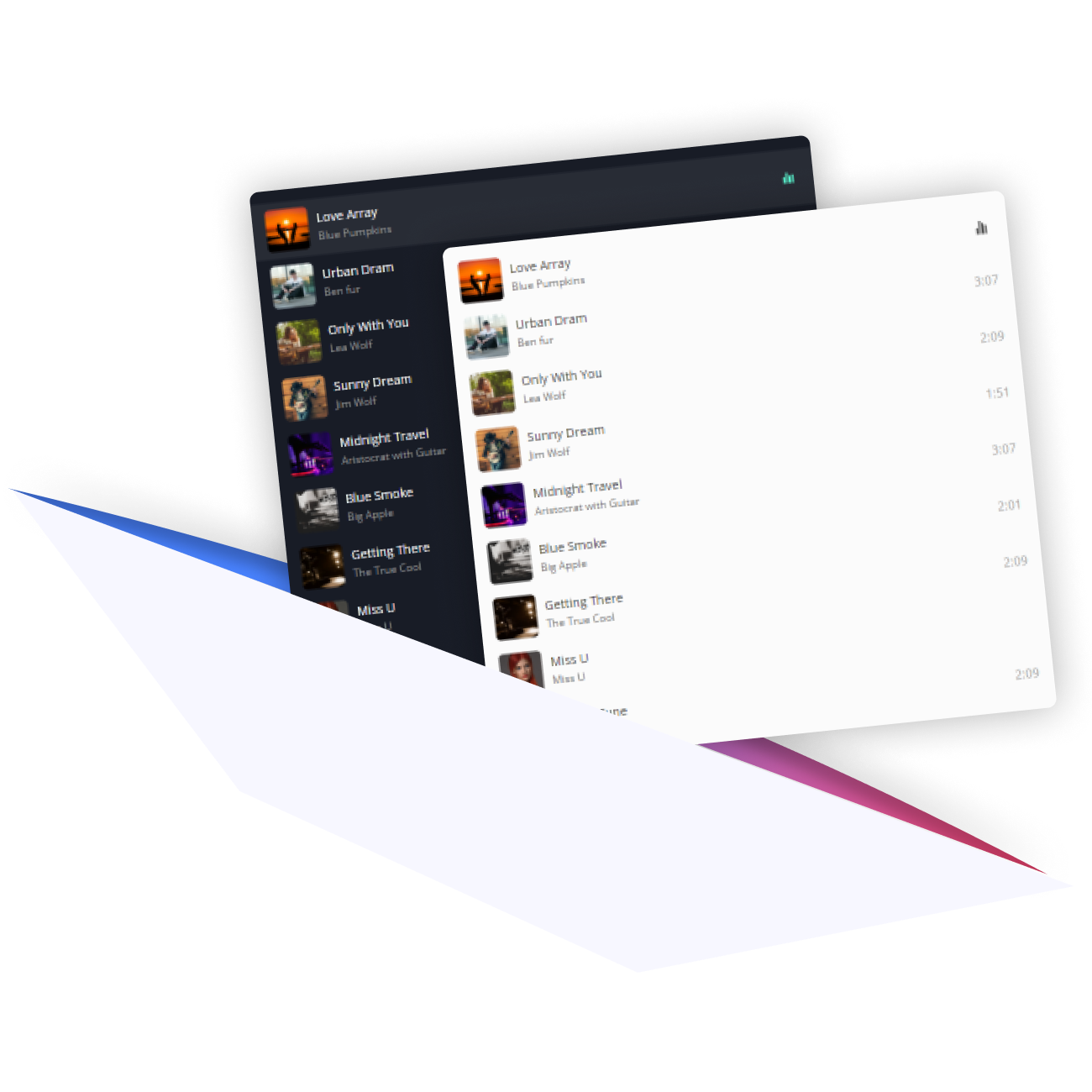 You can choose between the mini-player and the enlarged thumbnail in the Audio player app for Cratejoy- find out what works best for your Cratejoy store! 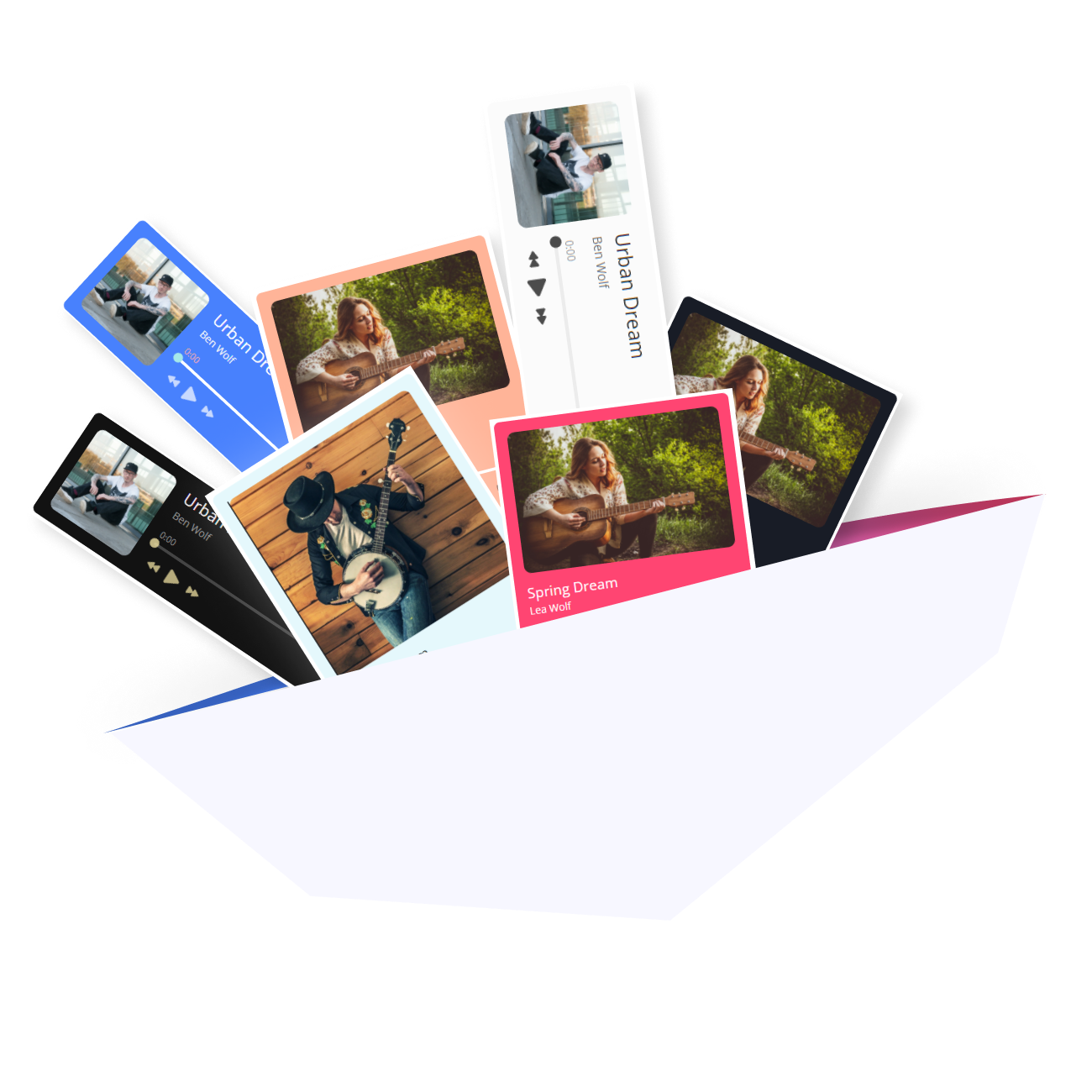 With the position option, you can alter the position of the Audio Player in your Cratejoy store. What about inline? On the right? At the bottom? Really, the choice is yours. 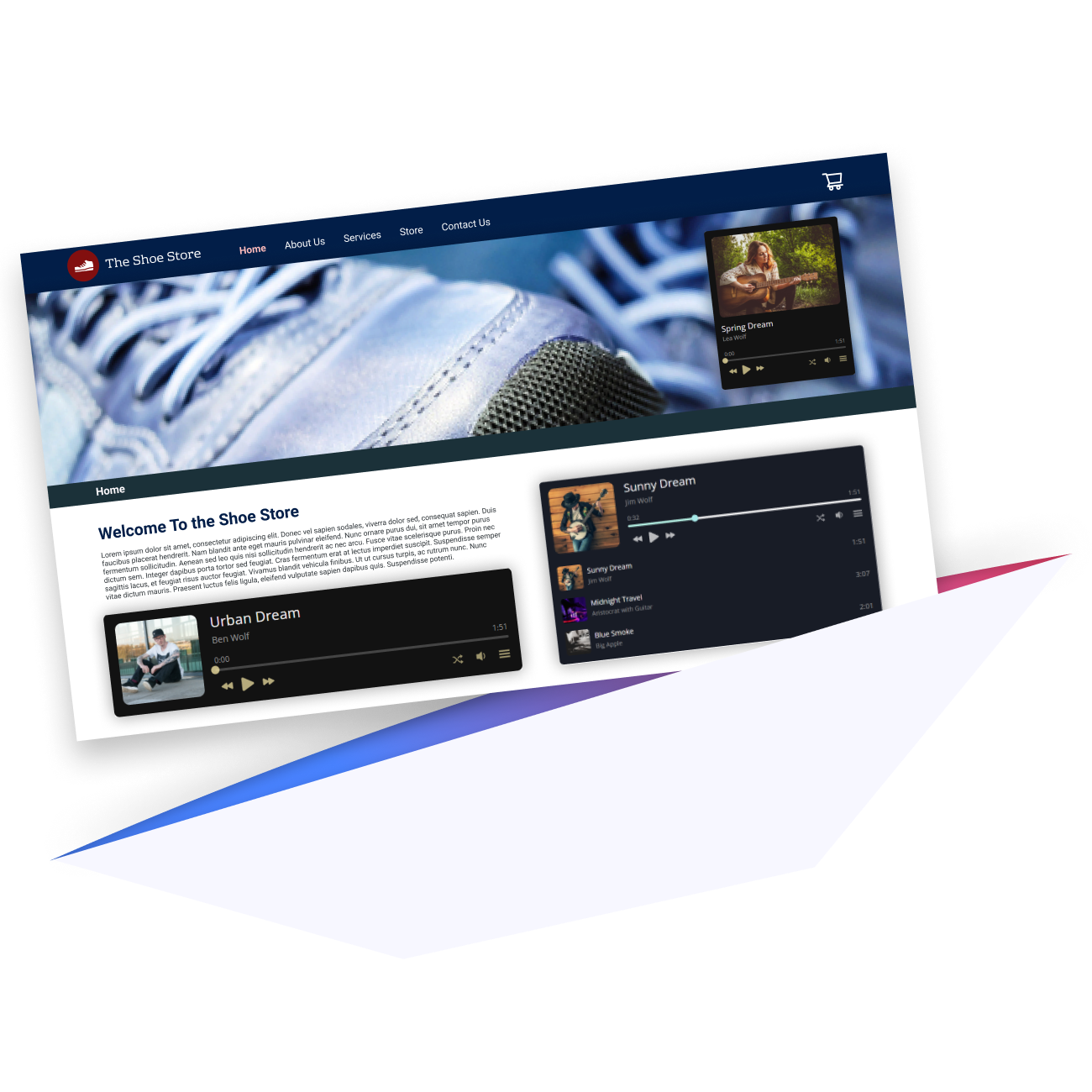 Various Skins for your Cratejoy store 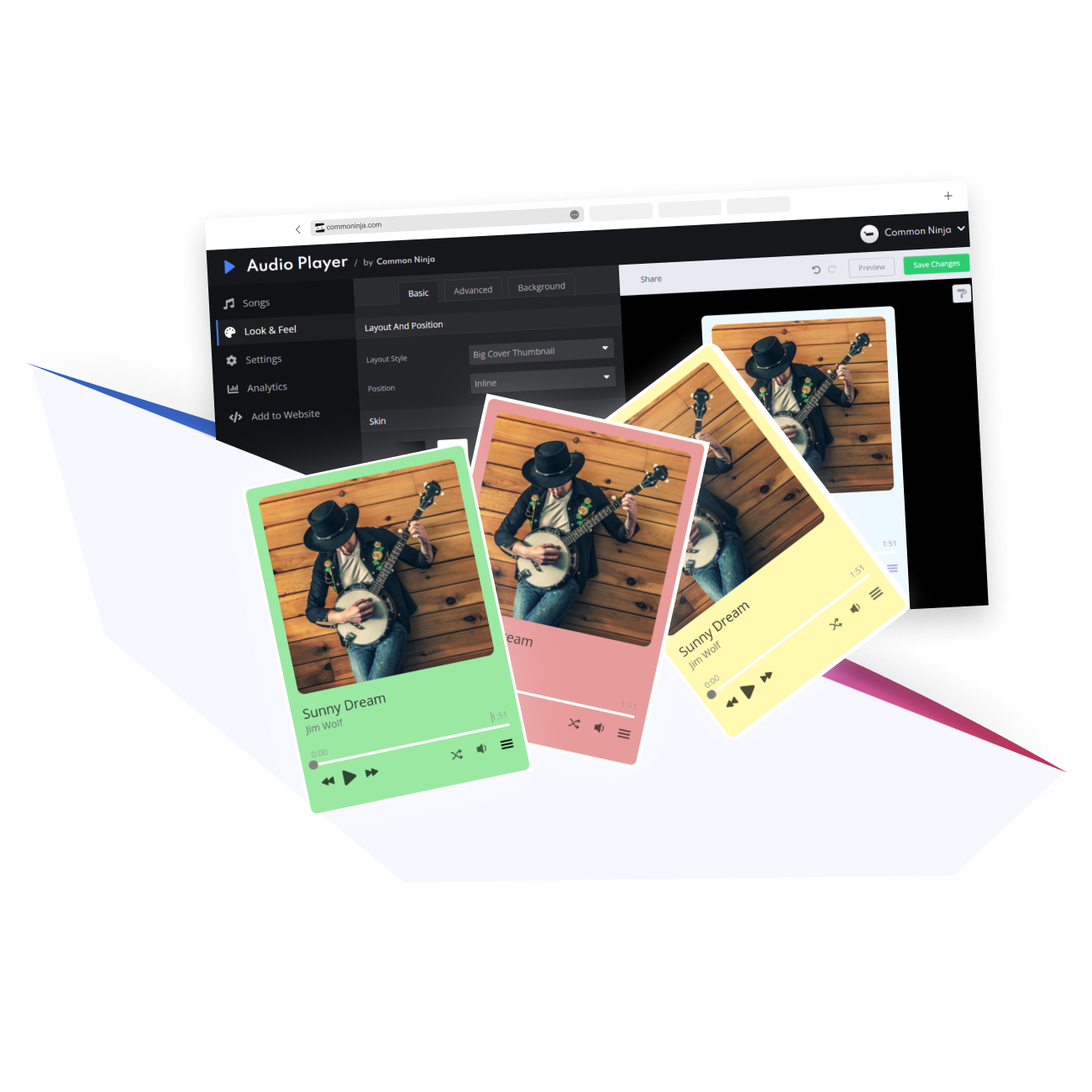 The app design is fully customizable

You can edit the design of the Audio player app for Cratejoy based on your Cratejoy store needs. Colors, fonts, spacing, and everything else can be changed! 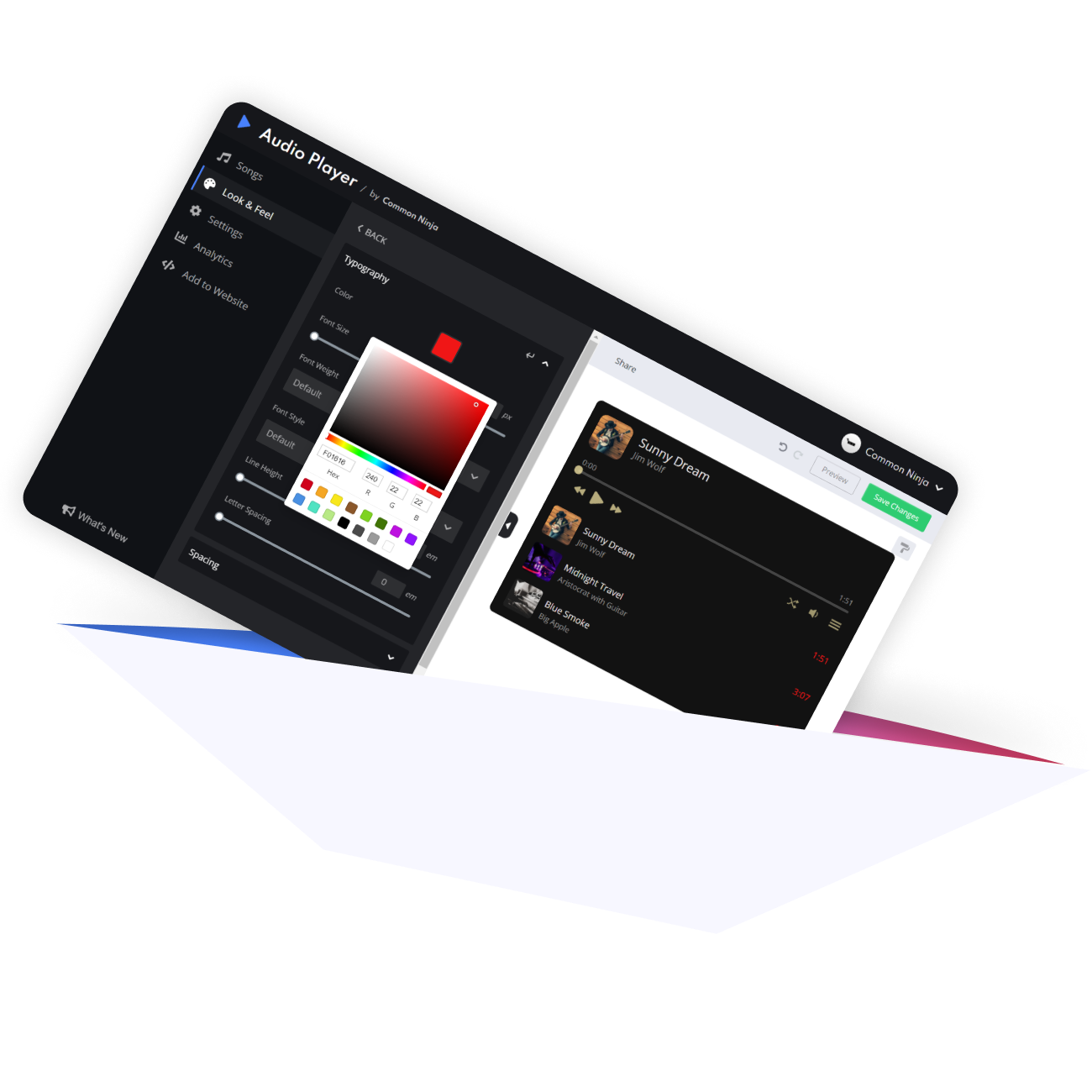 The Audio player app for Cratejoy is responsive and looks great on any device. In a mobile-first world, this feature will put you ahead of your competitors. 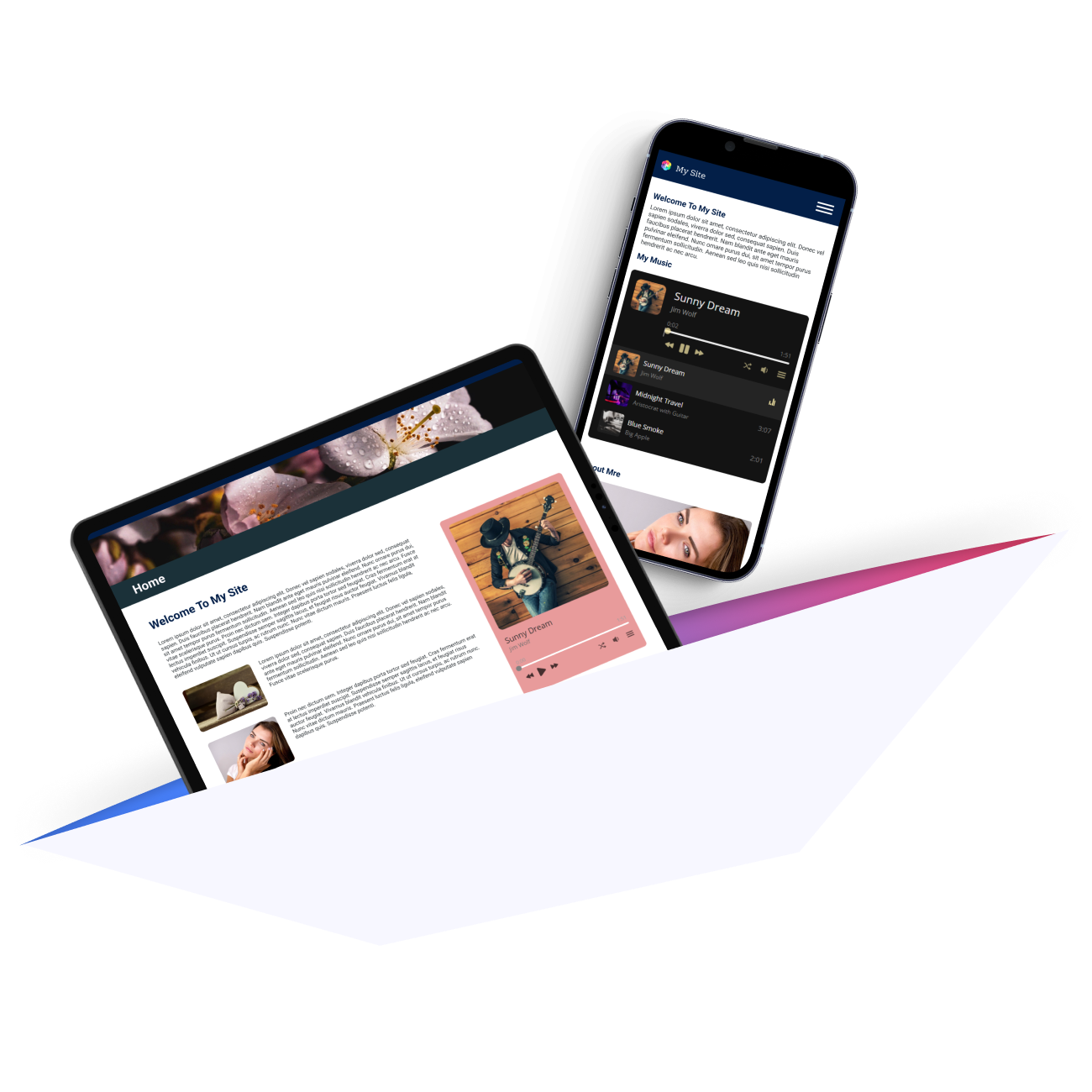 Easy To Use app

Audio player app for Cratejoy requires no coding knowledge and is easy to use. By simply dragging and dropping the elements in the app, you can customize it any way you want. 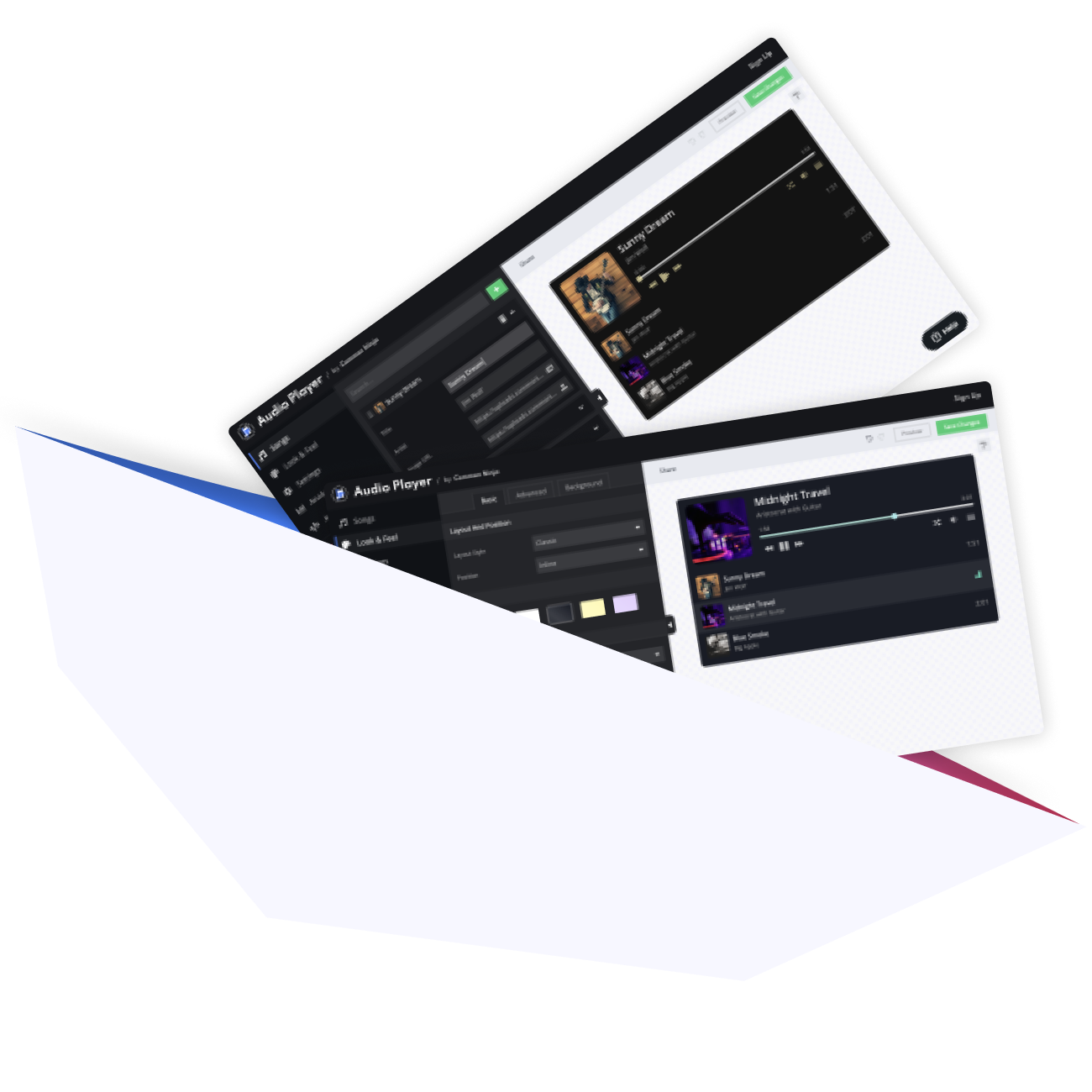 The Audio player for Cratejoy can be further customized using custom CSS, just like the rest of Common Ninja's apps. 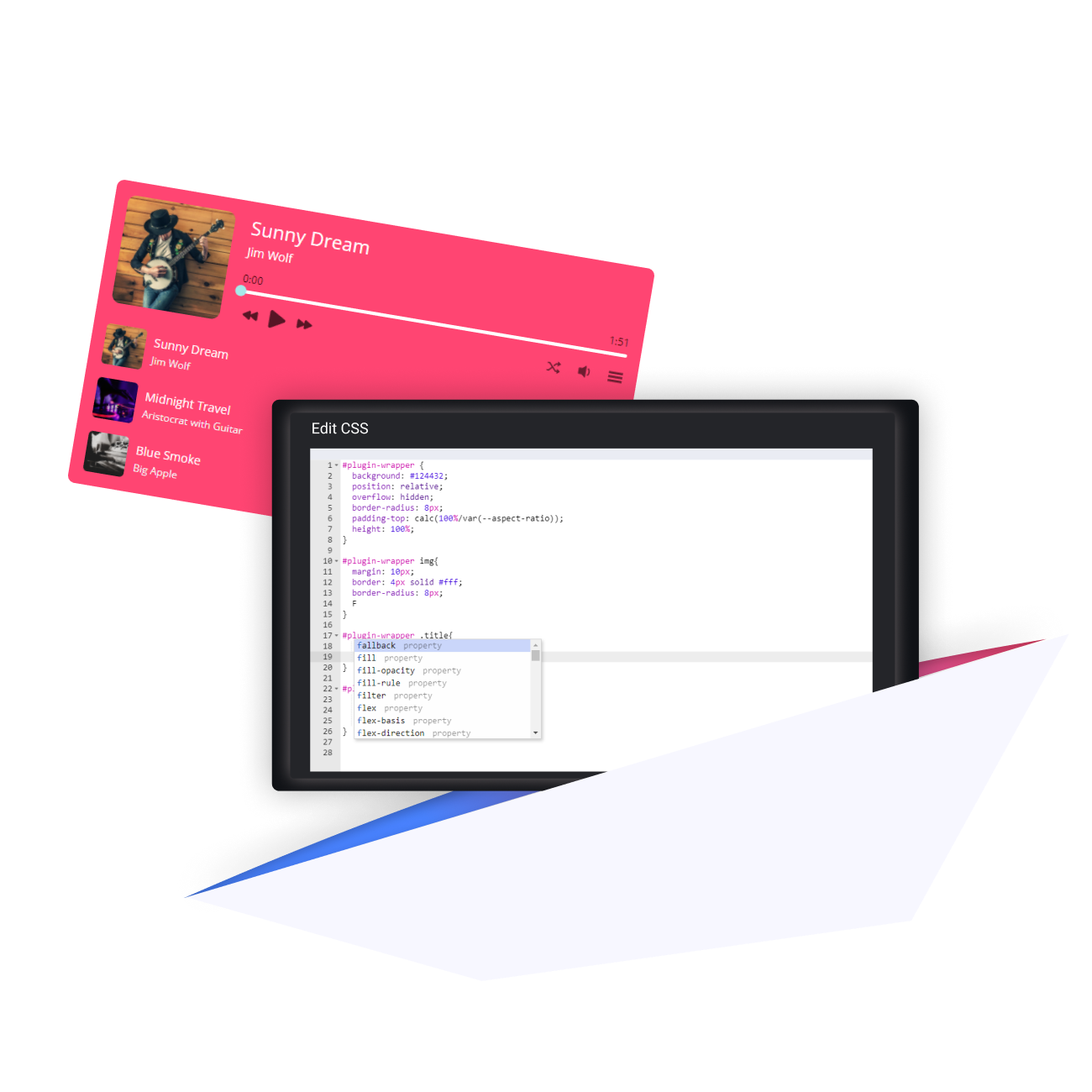 Embedding to your Cratejoy store is simple

How to install Audio Player on your store?

To add Common Ninja’s Audio Player app to your Cratejoy store, you have to do the following: First, go to the “Add to Website” tab on the Common Ninja Editor’s dashboard and copy the HTML code. 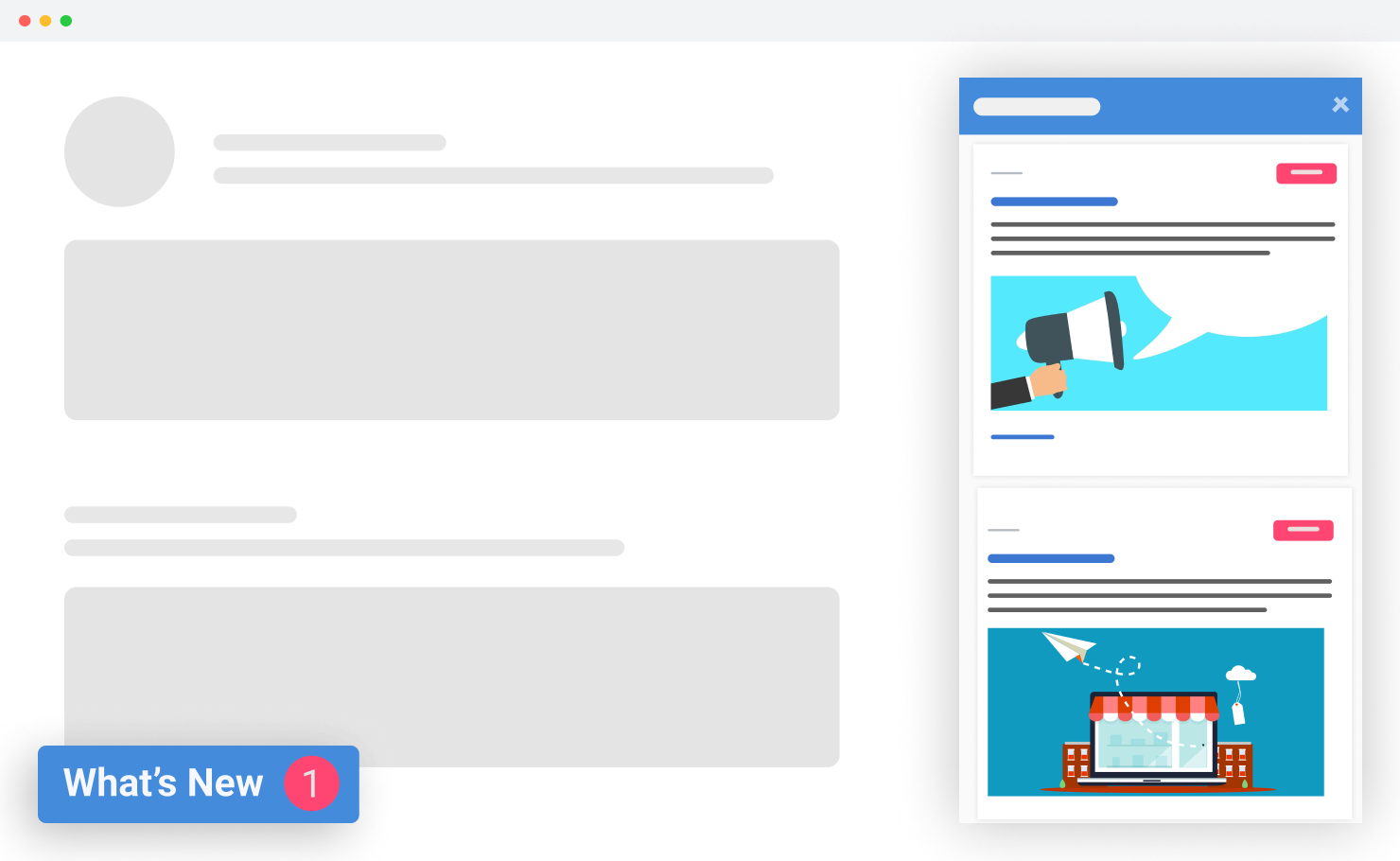 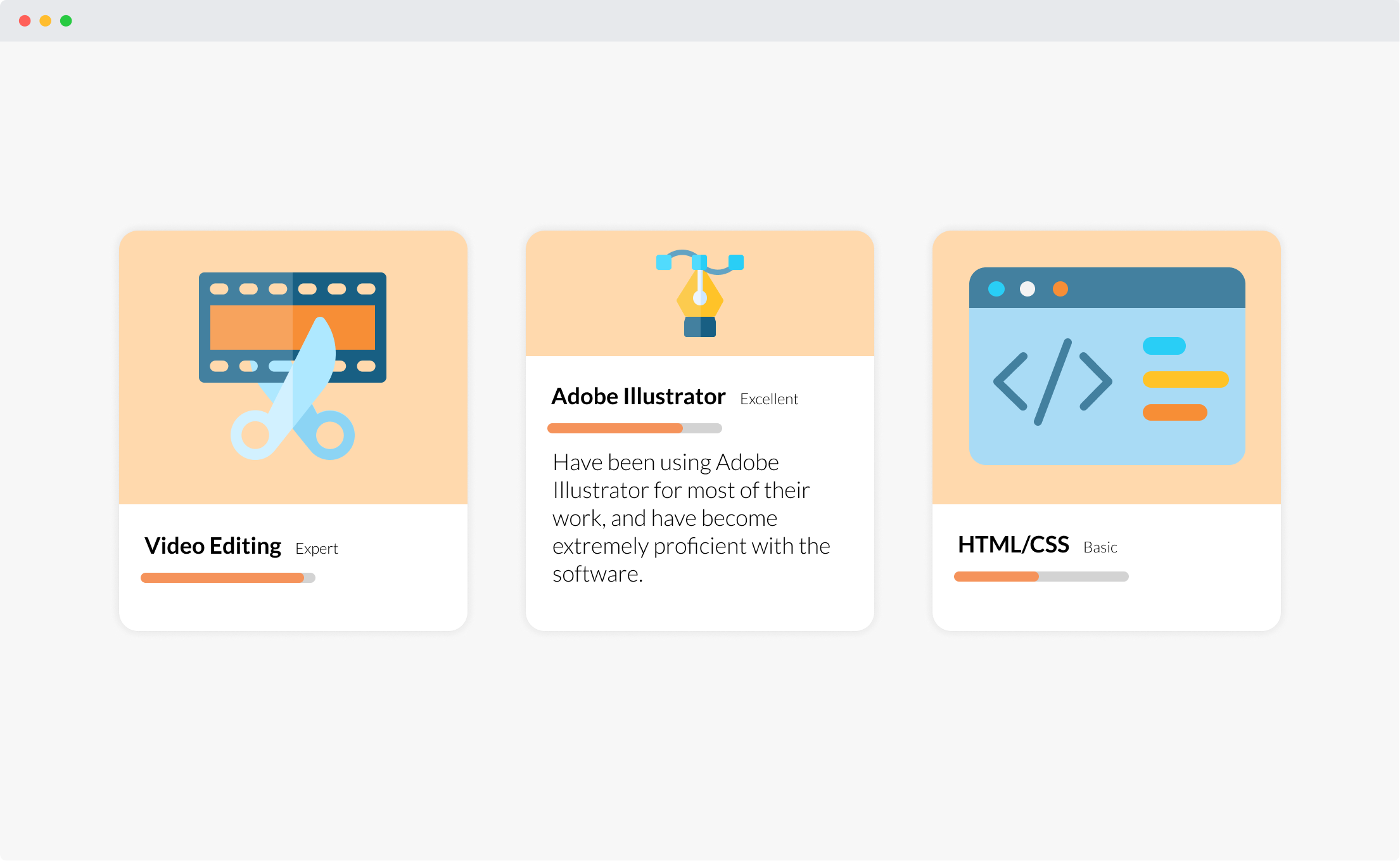 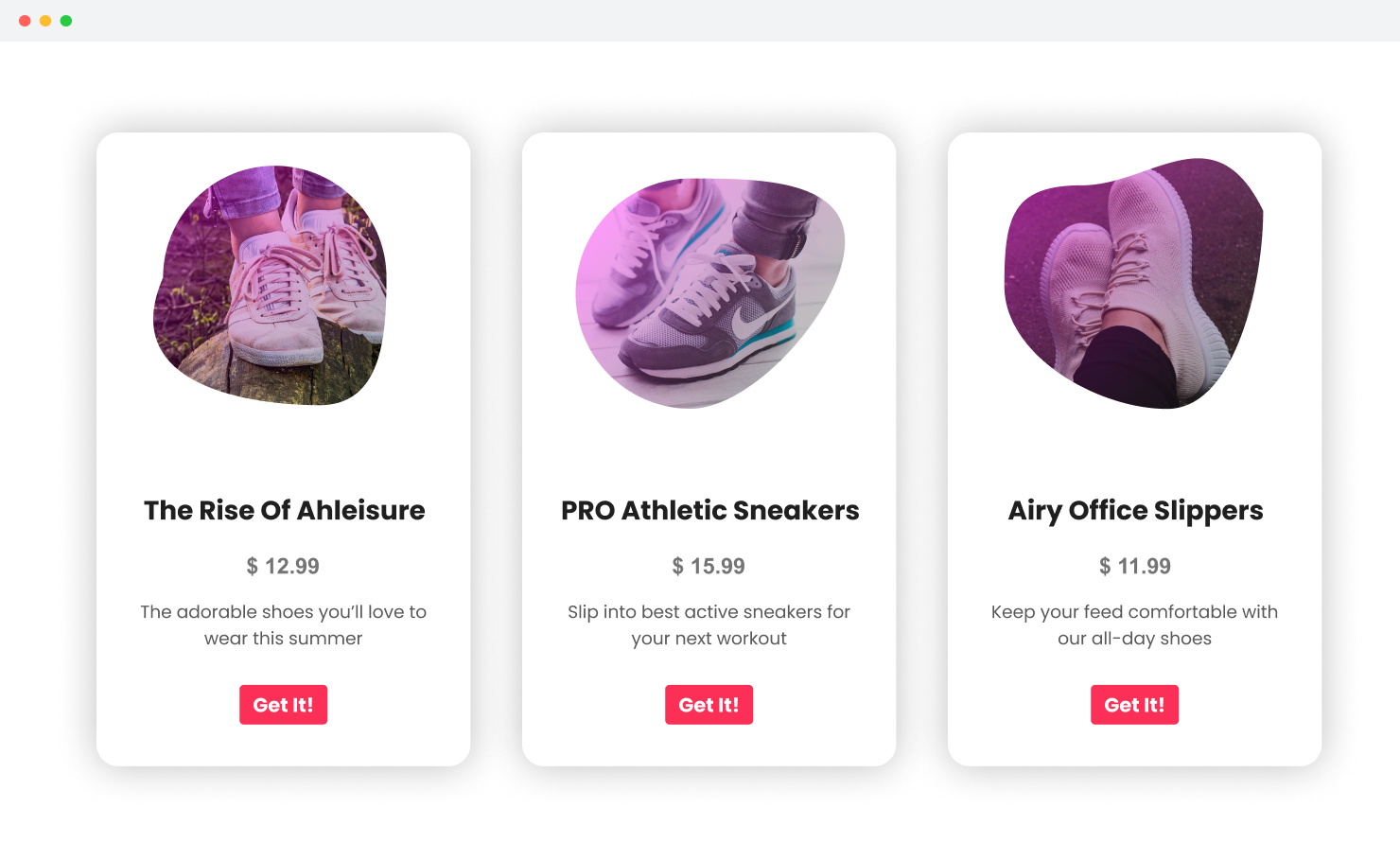 Can I link to any audio file?

Yes, you can link any audio file in the music player widget.

Can I upload any audio file?

Yes, so long as the size does not exceed 15MB.

Can I change the layout style of the audio player widget??

Can I change the MP3 Player widget position?

Can I change the audio player’s skin?

Can toggle the shuffle button on or off?

Can I toggle the playlist’s song image on or off?

Can I toggle the player’s time on or off?

Can I toggle the playlist’s time on or off?

How do I start using Common Ninja’s Audio Player widget ?

Common Ninja’s Audio Player widget is free to use. It is limited to a certain amount of views, however.

How do I embed the Music Player widget into my website?

It’s very easy to embed Common Ninja’s Audio Player widget on your website and the process consists of two steps:

Do I need to be able to code to use your Audio Player widget?

No. Using our Audio Player widget is very simple. The widget comes with an intuitive drag-and-drop interface and fully customizable options. Once you’ve finished editing the widget to your liking, all you need to do is copy the provided code and add it to your website.

Is it hard to embed your Audio Player widget?

Create Audio Player For Your Store